The Legacy of David Greig

Posted on February 14, 2016 by buildingourpast

Conditions were ripe for the success of multiple (chain) retailing in the late 19th century, including provision dealers and grocers such as Home & Colonial Stores, Maypole Dairies, Lipton’s, Sainsbury’s and David Greig. From a base established in Brixton, south London, in 1888 David Greig expanded to include around 220 shops. These were located throughout London and the Home Counties, with some scattered at far west as Wales and Torquay.

The company made a fairly successful transition into the supermarket age after the Second World War, though never on the scale of its more confident rival, Sainsbury’s. After being taken over in the early 1970s, its freehold properties were sold off: a classic case of asset stripping. Within a few years the name had vanished from the high street . . . . but not in its entirety. For even today the words ‘David Greig’ and the monogram ‘DG’ can be spotted occasionally on façades and mosaic floors, while the company’s plump thistle logo – a nod to the family’s Scottish antecedents – might be seen on the pilasters, consoles and stall risers of shopfronts. Some rare and precious tiled interiors also survive. One of the best is now the restaurant Le Chadron (The Thistle) at 65 Lordship Lane, Dulwich. Another, at 177 Streatham High Road is a Caribbean restaurant, and is a Grade II listed building.

Lordship Lane. According to the Tiles and Architectural Ceramics Society, the tiles for David Greig shops were manufactured by H & R Johnson.

The Story of David Greig

The date of the establishment of the David Greig chain is considered to be 1870, when the founder’s mother opened a small provisions shop at 32 High Street, Hornsey, north London. His father, David Murray Greig (1841-1931), originally from Leith in Scotland, worked as a cabinet maker for the shopfitter Frederick Sage & Co of Grays Inn Road. While the shop in Hornsey was initially in the charge of Mrs Greig, by the time the Census was taken in 1881 D. M. Grieg was himself described as a ‘provision dealer’. He had evidently joined in her enterprise. Fine decorative tiling survives at either end of the shopfront of 32 High Street, and the historical significance of the shop is commemorated by a green plaque.

David Greig (1866-1952) decided to strike out on his own as a provision dealer in 1888, and acquired a corner shop – previously a grocer’s shop – at 58 Atlantic Road, Brixton. He and his father fitted up the premises themselves, but the surviving tiling and thistle logo are later in date. The principal lines of merchandise were butter, cheese and eggs, with bacon sold at a counter in the open window, probably a sash raised over a marble slab. In 1889 Greig married, and the couple lived over the shop. His wife, Hannah (‘Annie’) Susan Deacock (1863-1941), later published an account of these early years in her book, My Life and Times being the Personal Reminiscences of Mrs David Greig (1940). Like Greig, she had a background in the retail trade, having worked as a child in her father’s dairy – later a David Greig branch – on Leather Lane, Holborn. From their young days the Greigs counted John Sainsbury and his wife – who also had a dairy in Holborn – amongst their friends.

Around 1890 Greig opened a second shop at Loughborough Junction, near Brixton. This was probably the small shop at 232 Coldharbour Lane where a wooden ‘David Greig’ fascia with ‘Brilliant cut’ gilded lettering has recently been uncovered beneath a modern sign for a futon workshop. It was followed by a third branch, a shop selling poultry and pork on the opposite side of Atlantic Road. Many other David Greig shops subsequently opened in the Brixton area, and beyond. 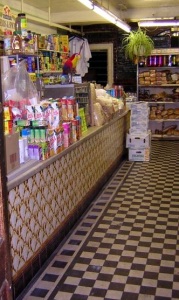 Reflecting their commercial prosperity and growing family, in 1894 the Greigs graduated to a three-storey terraced house called ‘Montrose’ at 55 Josephine Avenue, Brixton. In 1901 they moved again, to a larger house at 51 Brixton Hill, before finally, in 1912, settling at The Red House, Southend Road, Beckenham, Kent. This mansion had its own museum and expansive grounds; neighbours included the Robertsons of marmalade fame and the Craddocks, later to excel as TV cooks. In addition, the Greigs had a seaside villa at Westgate (acquired c.1914) and a country house, Oversley Castle in Warwickshire (acquired 1919). The founder was followed into the business by his son David Ross Greig (1891-1964), who became the Chairman. Until 1972 key board positions were occupied by members of the Greig family – whether direct descendants of the founder or cousins – and they remained the principal shareholders.

Although he could draw on the skills of his joiner father, David Greig probably engaged in building work, as well as specialist shopfitting, from the 1890s. Exteriors were often clad in polished pink granite, as indeed were Sainsbury’s shops. Like other provision dealers, David Greig’s shops featured large sash windows with marble slabs to either side of the doorway; those who traded additionally in dry goods, like Lipton’s, generally had a fixed window to one side and a sash to the other. Two long counters ran the length of the shop to either side of a central gangway with a black-and-white chequered floor. A shop of this exact type survived completely intact until very recently on Deptford High Road. To the rear was the cash booth and a cold store. The walls and counters were clad in decorative tiles in rich ochre and oxblood colours, and the thistle motif was prominent. By the time of the First World War if not earlier, own-brand goods with the ‘thistle’ label – including groceries – were sold in David Greig’s shops. 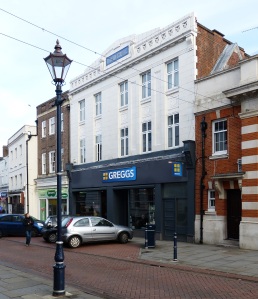 By the 1920s David Greig’s architects’ department was headed by Philip Woollatt Home (1877-1947) who had designed kitchenless houses for Brent Garden Village in 1909-11 and was in partnership with William Hollis until 1912. Home’s name crops up in relation to David Greig stores in several locations throughout the 1920s and 1930s, including Exmouth Market, London (1924), Windsor (1927), Basingstoke (1930) and Clacton (1932-33). He may also have had a hand in designing the Hitchin branch, with its faience front. In general, Home appears to have engaged local builders to execute works for David Greig.

Around 1928 David Greig’s headquarters moved from Ferndale Road, Brixton, to ‘The Scotch House’ at 145 Waterloo Road. This imposing listed modern building was designed by Payne & Wyatt, with a façade on the model of Selfridge’s store. It fell victim to façadism around 1979-80, with all but the front elevation being demolished to make way for a new development. Part of Greig’s depot to the rear on Webber Street was photographed prior to demolition.

The most celebrated building associated with David Greig’s business is the store at 23 St George’s Street, Canterbury, designed by Robert Paine & Partners and built in 1954. It is listed (at Grade II) as a ‘butcher’s shop’, though described at the time as a ‘grocer’s shop’. Significant alterations were made when the premises were taken over by Superdrug around 2000. A rather wonderful painting of 1954 by Gordon Davis depicts the construction of the shop, with its distinctive row of ‘floating’ gables, in a quarter of the city which had suffered particularly badly from bomb damage during the war. 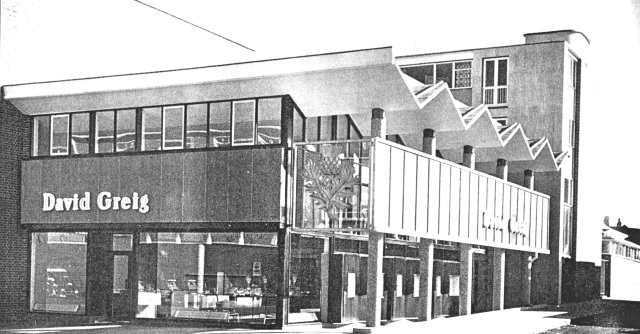 Moving into the world of the supermarket, David Greig had to expand its merchandise beyond its traditional specialisms. In 1962 it amalgamated with Colebrook & Co, a chain of butchers and fishmongers with shops throughout the south and Midlands. Expansion and modernisation were clearly on the agenda and in 1963 the company advertised in The Times for a ‘qualified architect to assist in development and maintenance of shop property spread throughout Southern England. Age about 30.’ I have not identified the successful candidate.

In 1972 David Greig was taken over by Wrensons Stores, a Birmingham supermarket group led by Martin and Peter Green. The price was £10 million. At this time David Greig had 156 shops with an annual turnover of £30 million that can be compared with Tesco’s £300 million and Sainsbury’s £262 million. Wrensons was subsequently renamed David Greig. Before long six freehold stores (Bromley, High Wycombe, Maidenhead, Ramsgate, Torquay and Plymouth) had been sold for £1.9 million, and the Waterloo Road headquarters was on the market at £3.25 million. 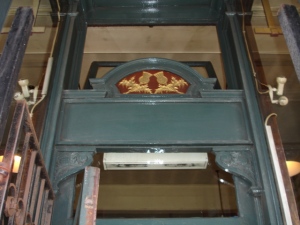 In April 1974 a controversial bid was made for the David Greig Grocery Group by Combined English Stores (CES). The initial bid of £12,250,000 million later dropped to £8.5 million, yet CES shareholders voted against the acquisition. This was immediately followed by a successful bid of £6 million from Fitch Lovell (Key Markets), largely recouped – in the usual dubious but time-honoured way – by selling shop property worth £3.4 million. By the end of 1976 only 85 David Greig shops remained. Despite talk of opening new shops under the David Greig name, before long the chain was extinct. The survival of so many examples of David Greig’s shopfitting 40 years later can only be ascribed to its superb quality.

Acknowledgement: thanks to the Tiles & Architectural Ceramics Society for telling me that H & R Johnson manufactured David Greig’s wonderful tiles.

50 Responses to The Legacy of David Greig