Posted on February 29, 2016 by buildingourpast

In the morning Mr Graham preached from Luke 14th chap 17th verse Come for all things are now ready The feast the invitation and the blessings partaken of. In the afternoon Mr McRae Ness from Galatians 2nd chapter 16th verse. In the evening Mr Graham from John 17th chap 24th verse Father I will that they also whom thou hast given me be with me where I am that they may behold my glory A gracious will an impartial will and the Legatees. I was at tea with Miss E. McDonald.

I had a letter from Mann Byars & Co and Geo Matheson of W&M, about John. Mr Graham away to Glasgow Presbytery. Hector Ross taking McA & McKenzie’s stock and I hear that J. McKenzie in Hamilton has failed. Pretty busy today.

Today I met Mrs Reid. She came and spoke very frankly to me.

Andrew Chisholme after a row with A. McFarlane leaves Mr Russell. I had a letter from James Smart about the situation for John.

No service in the U. P. church. I had a walk in the forenoon with Alex McAulay. In the afternoon Mr McKenzie preached from 1st Peter 4th Chap 18th verse And if the righteous scarcely be saved where shall the ungodly and sinner appear 1st who are the righteous 2nd what is it to be saved & 3 where shall the unsaved appear. In the evening Mr McRae E. C. preached from 2nd Samuel 15th chap 25 & 26 verses he shewed David’s love for devotion and his trust and acquiescence in the providence of God

Great preparations going on for the illumination and bonfires tomorrow. At night I went down to Holm for a gig. 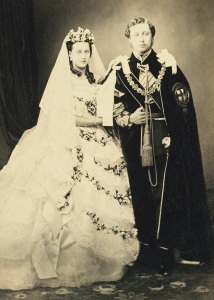 The Prince of Wales and Princess Alexandra

Prince of Wales married to Alexandra of Denmark great rejoicings through the whole Kingdom. Stornoway was very well illuminated and 2 bonefires (sic). I had a splendid trip to the Butt of Lewis along with Rodk. McKenzie. We left this at ½ past 5 A.M. arrived at Barvas at 8 here we changed horse and left at 9. We were very kindly treated at the Millers at Ness we left the horse and gig here and travelled to the Butt a distance of 4 miles where we arrived at 2 P.M. The coast here is very wild and bold there is a most magnificent lighthouse built here and through the kindness of Mr Ross the mate we were shewn through it and how it was worked. We left this at 3 o’clock and on our arrival at the mill a sumptuous dinner waited us. We left this after 4 arrived at Barvas at 8 got our own horse and arrived in Stornoway at 11 P.M. I had a letter from John. 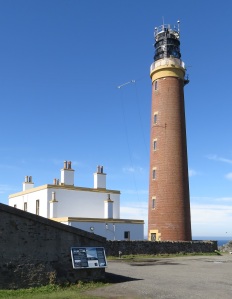 [Note: Butt of Lewis Lighthouse. The Lighthouse tower stands 118ft high. It was designed by David and Thomas Stevenson, and built between 1859 and 1862. The ‘dioptric fixed white light’, fuelled by ‘Colza Oil’, was lit for the first time on 15 October 1862. At that time the Commissioners of Northern Lighthouse reported that both the red brick tower and the keeper’s house were painted white, but this was evidently not maintained. The first principal keeper was Mr John Sinclair. The Lighthouse is a Category A Listed Building.]

Ness Mill (Muileann Nis), South Dell, where Charles Morrison and Roderick McKenzie left their horse and gig, presumably completing the last 4 miles of the journey to the Butt of Lewis Lighthouse on foot. Sadly, this Category B listed mill is on the ‘Buildings at Risk’ register. (K. Morrison, 2016)

I spoke to Mr Russell about John and he engages him for 3 years. At night I went home with Christina and then was in Mr Russell’s till very late mending the Balloon.

Wrote a letter to John and sent it by the Hawk via Portree.

[Note: At this time Margaret Gerrie (b. 1830) was the schoolmistress at Boston Union Workhouse in Lincolnshire. She seems to have moved to Lincolnshire to live with her uncle and aunt, Robert and Mary Geary, who were schoolmaster and schoolmistress of Horncastle Union Workhouse. Margaret may have joined her aunt after her uncle’s death in 1852. In August 1855 she obtained the post of schoolmistress at Boston Union Workhouse and remained there until her marriage on 6 September 1864 to James Hodgins, a schoolteacher from Ashton-under-Lyne, Lancashire, ten years her junior. James was accepted by Margaret’s Stornoway family: Charles and Christina even named one of their sons James Hodgins Morrison, in his honour. Margaret and James both ran schools in Boston, where they lived at 142 West Street. Their only child, Margaret Annie, was born 16 May 1868 but, to Margaret’s great grief, died the following March. The Hodgins had moved to Dolby House, Holbeach, by 1881, but separated around 1883. Margaret opened a private school at 37 Sackville Street, Everton, but this was a ‘constant struggle’. She gave up in 1890 and moved to Matthew Russell’s in Stornoway, where she assumed the role of housekeeper until her death in 1900. Meanwhile, shortly after the separation, James started a family with a younger woman, Maria Hollis Morley, marrying her after Margaret’s death. Following Maria’s death in 1912 James married Constance Stapleton Spaight. He died in 1929.]