‘The Greatest Grocers in the World’: International Tea Company’s Stores

Posted on August 25, 2019 by buildingourpast

‘International Stores’ was a common sight on English high streets from 1878, when the first shop opened in Brentford, until 1988, when all remaining outlets were rebranded ‘Gateway’.

To give the company its full name, ‘International Tea Company’s Stores’ was the trading arm of the food importing and processing firm, Kearley & Tonge, whose vast headquarters and central warehouses were based at Mitre Square in the City of London.

With over a thousand stores at its height, International claimed to be ‘the greatest grocer in the world’. After the Second World War, its small grocery and provisions shops – mostly located in southern England – were redeveloped or superseded by urban supermarkets. As a result, very few of the pre-war shops have survived intact. And those that do survive are not easy to recognise.

Until the 1930s, fascias bore the name ‘International Stores’ in bold brilliant-cut gilded lettering. The name was repeated on the deep brass sills of the stall risers, and often on an additional glazed panel positioned between the sill and the stall board.

Many of the shops had large windows with fixed glazing, but large branches – such as Uppingham and Southwold – had a sash to one side of the entrance, corresponding to a provisions counter. Uppingham and Southwold, although 130 miles apart, shared the same style of olive green tiled pilasters and capitals. The attractive glazing pattern seen at Uppingham, probably dating from c.1910, was repeated verbatim at a long-lost store in Eastbourne.

The brand name of International’s tea, ‘Ceylindo’, was sometimes affixed to a thin ventilation grille that ran along the top of the windows – this survives at both Southwold and  Uppingham. Old photographs show that the transom beneath the grille was usually supported by small spandrels, sometimes terminating in pendants.

In other respects, International Stores from the 1900s, 1910s and 1920s displayed considerable variety in the style of their pilasters, consoles, doorways, and even lanterns. The house style was never as distinctive and coherent, or so universally applied, as that of – for example – Home & Colonial Stores or Lipton’s.

Despite its fairly loose house style, International must have undertaken a lot of building and renovation work because, from the 1890s until around 1930, it had a marked preference for freehold property – often snapping up shops that had been vacant for some time.

Although this saved money on rent and meant that permission did not have to be sought from landlords for alterations, the Chairman had to justify the policy to stockholders who believed the capital might be better invested elsewhere. International Stores must have had active in-house architects’ and shopfitters’ departments, but little is known about them before the late 1940s, when Mr R. O. Slipper was the Chief Architect.

The real estate policy changed during the depression of the early 1930s. Under a new Chairman, International set up a subsidiary, ITS Property Development Co. Ltd., to develop property by building not just single shops, but pairs or groups of shops. Its first schemes were in London and Brighton. In an allusion to the central office – and to some of International’s branded provisions – new buildings might include a bishop’s mitre motif. An example can be spotted in Reigate. 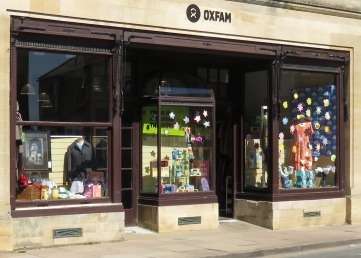 A chaste modern style of shopfront was adopted in the 1930s. The well-preserved example in Oundle has a flush stone surround rather than an applied wooden frame. A domed display case stands between two doorways: provisions to the left; groceries to the right. The general lines of this layout – though not yet couched in a modern style – had emerged in the 1920s and was illustrated in a widely-published press advertisement of 1928 (see above).

At Oundle the name ‘International Stores’ has been removed from the mosaic floor, leaving decorative garlands. But another example, with full lettering, can be seen in Petersfield.

International began to expand through acquisition before the war, buying the Star Tea Company (and with it, James Pegram & Co and Ridgway Tea) in 1928. Star brought 463 shops to the group, giving it a total of 926. In 1935 George J. Mason, with 385 shops centred on Birmingham, took the count well over 1,000. An early post-war purchase, in 1947, was the Payantake chain.

After 1945 International was at the forefront of the rush to implement self-service. Experiments in the years 1947-51 enabled managers to weigh the cost of conversion against that of maintaining fully serviced branches. The devotion to freehold property was long forgotten, and in 1959 International began to negotiate sale and leaseback contracts with the Legal & General Assurance Society. This helped to finance not just conversion to self-service (50 by 1955 and 263 by 1960), but the building of supermarkets (that is, units with over 2000 sq. ft. sales space) on new sites. In 1962, the first tranche of unwanted small shops was put on the market.

Having modernised its portfolio, International, with 900 outlets, was taken over by British American Tobacco in 1972 for £68 million. At this time the supermarkets had fascias with red lettering (‘International’) on a white ground. After a series of acquisitions and disposals, International, now with just 380 outlets, was bought by the Dee Corporation in 1984 for £180 million. The International name vanished when the shops were rebranded Gateway in 1988. These later became Somerfield, a name which would itself disappear in 2009-11.

2 Responses to ‘The Greatest Grocers in the World’: International Tea Company’s Stores