The Stornoway shopkeeper Charles Morrison (1838-1920) came from a family of farmers and meal dealers living at Cyderhall near Dornoch, on the east coast of Scotland. Around 1855, aged 16, he set off for Stornoway, a fishing town on the Isle of Lewis, the northernmost of the Western Isles. From Dingwall – according to family tradition – Charles journeyed overland in the company of the postman (who crossed northern Scotland by foot on a weekly basis), then sought his passage over the Minch.

Once in Stornoway – the commercial heart of the island – Charles secured an apprenticeship in the drapery and grocery shop of Matthew Russell (1818-92), another ‘incomer’. He lodged over the shop on South Beach Street with Russell’s family. In June 1861 Charles left Russell and entered into partnership as a general merchant with Angus Macdonald from Torridon. For a couple of years they traded as Macdonald & Morrison from a shop at 7 North Beach Street (close to the Lewis Hotel) owned by a Miss E. (Betsey) Macdonald. Despite having the same surname, she doesn’t appear to have been related to Angus.

This period of Charles’s life is covered in his diary, which is published in this blog.

Macdonald & Morrison’s partnership was dissolved rather acrimoniously in May 1864 and each man set up his own business in the town. Macdonald remained in the North Beach Street shop while Charles moved out. The exact location of his first independent shop has yet to be discovered.

In 1869 Macdonald sold his business and stock (‘drapery, grocery, hardware, boots and shoes, ropes and lines &c’) to McIver & McLean. Improvements had recently been completed in the locality. These included the widening of Point Street and North Beach; the creation of Bank Street (which was given various names, including Cross Street and Harbour Lane); the formation of Percival Square, and extensions to both North Beach and Cromwell Street quays. Two years earlier Macdonald had bought buildings ‘facing North Beach Street, all near the new National Bank’ (John O’Groat Journal, 28 February 1867, 2). This included 18 North Beach Street – later T. B. Macaulay’s haberdashery and now (2017) Delights delicatessen. Macdonald remodelled 18 North Beach Street and built a new house to its rear, moving there in February 1868.

Since first publishing this blog, I have been contacted by Catherine Beveridge, a descendant of Charles Morrison’s erstwhile business partner Angus Macdonald. It turns out that Angus also kept a diary in the 1860s, and Catherine has kindly shared this with me! This exciting discovery sheds more light on Stornoway businesses in the 1860s, and refers to Macdonald’s building works. The key entries can be seen here. 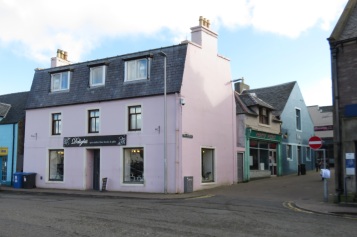 18 North Beach Street (pink) with 5 Bank Street (blue) to the rear. The building between them was probably Angus Macdonald’s family home.

The address assigned to the Macdonald family in the Census of 1871 was ‘5 Bank Street’. The previous entry recorded Charles Morrison, with his own family and shop assistants, at ‘6 Point Street Lane’. Point Street Lane may have been yet another name for Bank Street.

Thus it seems likely that ‘6 Point Street Lane’ eventually (confusingly!) became 5 Bank Street, and it was here that Charles Morrison conducted business for most of his life. It is intriguing to realise that by 1871 Angus Macdonald and Charles Morrison were living and working next door to one another. One hopes that they got over the disagreement recorded in Charles’s diary of 1863-64, and remained amicable neighbours until Macdonald’s death in 1874. Macdonald’s stock and the tenancy of his shop at 18 North Beach Street were advertised for sale in 1875 (Glasgow Herald, 3 February 1875, 2). His widow, Eliza, quickly remarried.

The building in which Charles Morrison’s shop was established by 1871 had been erected in 1867. Its predecessor on the same site was Stornoway’s first Sailors’ Home. An article of 1853 recorded Sir James Matheson’s gift of ‘a new house’ to be used as a Sailors’ Home (Scottish Guardian, 7 October 1853, 3). Other accounts reveal that the Home was supervised by ‘Big Meg’ and had a coffee room to ‘keep poor “Jack” from the grog shops’ (Banffshire Journal, 23 May 1854, 3). When the building was demolished in 1867, presumably for street widening, Matheson sold the property to Alexander Mackenzie, junior (Feu Charter of 1916). Mackenzie – variously described as a joiner and an architect – may have designed and constructed the replacement building himself (John O’Groat Journal, 28 February 1867).

Mackenzie’s new building accommodated his workshop at one end (on Bank Street) and Mackenzie & Macfarlane’s drapers, grocers and ironmongers shop (est. 1867) at the other end. Charles Morrison had set up his shop in the Bank Street end of the building – presumably in Mackenzie’s former workshop – by 1871, but it was not until 1914 that he acquired ownership of the premises from Mackenzie’s heirs. Charles’s family had moved out by 1881 and it is rumoured that the upper-floor rooms were then used to accommodate herring girls during the fishing season.

In 1927, several years after Charles’s death, his daughter-in-law purchased  Mackenzie and Macfarlane’s (‘Holy Alec’s’) half of the building for £800. From then until 2002 Charles Morrison & Son Ltd (incorporated 1928) comprised the two shops.

‘Charlie Morrison’s’ (or Buth Thearlaich in Gaelic) was famous for selling rope, paraffin, paints – indeed, all kinds of hardware – and its main customers were crofters and fishermen. The two shops, with their separate entrances on Bank Street and Point Street, descended through four generations of the Morrison family, who celebrated the centenary of the company in 1964. After the business closed in 2002, the building was taken over by the ‘Digby Chick’, one of Stornoway’s best restaurants.

By 1863, when the diary begins, Charles was courting Christina Gerrie (1838- 1921; often ‘C’ in the diary), whose sister Georgina was married to Matthew Russell. The Gerries came from the same area as Charles, having farmed at Proncy Mains near Dornoch until the estate went bankrupt in 1841. In 1844, William Gerrie (1790-1863), Christina’s father, took up the role of ‘Inspector of Roads and Bridges’ to Sir James Matheson (1796-1878). Having made his fortune in the Orient trading opium and tea, Matheson purchased the island in 1844 and built Lews Castle, overlooking the town and the harbour. Gerrie was involved in the creation of the castle grounds and the construction of roads throughout the island. When his work for Matheson was completed, Gerrie moved his family to Goathill Farm just outside Stornoway.

Socially, the Gerries were a cut above Charles Morrison and opposed his relationship with Christina. Nevertheless, Charles and Christina were married in September 1864 and had  seven children. They lived at various addresses in Stornoway (on Kenneth Street, Point Street, Francis Street, Cromwell Street and Lewis Street) before settling, in 1905, at Dornoch House on Goathill Road.

Many years after his death Charles Morrison was remembered in Stornoway ‘as a dapper, well dressed gentleman who wore a “cut-away” black morning coat, hard lum hat and stiff white collar and tie’. According to his obituary in the Highland News, he was ‘a man of marvellous personal activity, clear of intellect, and alert in business; and his swiftly moving figure has been familiar to several generations of Stornowegians as he darted  swiftly from place to place – indeed, it may be said that he seldom walked’. He was actively engaged in his business, alongside his son Matthew, until his last short illness.

Neatly written entries in Charles’s personal diary of 1863-64, a small black notebook, chart the development of his romantic relationship with Christina, the progress of his business, the economy and daily news of Stornoway, local characters, and the subject of Sunday sermons delivered at the United Presbyterian (‘UP’) Church on James Street. Original spelling and (very sparse) punctuation have been retained.

The text of the diary is copyright K. Morrison.