This book is a history of Woolworth’s century-long domination of high streets throughout England, Ireland, Scotland and Wales, seen through the prism of its stores. Between 1909 and 2008 Woolworth’s opened over a thousand stores, many built to designs by the company’s own architects. The high point was the 1930s, when Woolworth’s embraced a confident art deco style. The book contains wonderful images from the Historic England Archive that have never been published before.

Click here for 8 classic features to help you recognise an old Woolworth’s store, and some of my childhood memories.

The splendid Apethorpe Hall (now ‘Apethorpe Palace’) in Northamptonshire was a desperate ‘Building at Risk’ case in 2004, when English Heritage took the site under its wing and began an extensive repair programme. This saved the glorious Jacobean interiors, and also offered a once in a lifetime opportunity for us to research and investigate a hugely significant country house in detail. Between 2004 and 2014 I had the privilege of working alongside lots of brilliant experts who contributed to the understanding of Apethorpe. Our various discoveries and insights have been woven together by me and my fellow authors (Emily Cole, Nick Hill, John Cattell and Pete Smith) to create a seamless narrative history of the house. We hope the book will raise the profile of Apethorpe, and restore the building to its rightful place in an important national story: that of the English country house.

I have also published the following about aspects of Apethorpe: 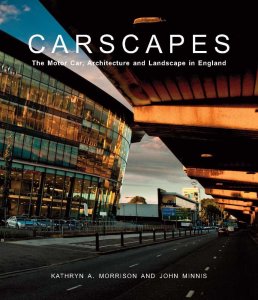 Written with John Minnis, Carscapes is an examination of how the motor car has wrought enormous changes on our urban and rural landscapes over the last 120 years. It covers the full range of new building types invented to cater for cars and drivers: car factories, showrooms, motor houses, repair garages, petrol stations, roadhouses, motorway service stations, car parks, and even scrap yards. It also looks at how cars – and roads constructed for cars – transformed our countryside and towns.

John Minnis and I have also written Buildings and Infrastructure for the Motor Car, an Introduction to Heritage Assets published on the Historic England website in 2013. It serves as a guide to assessments, particularly in relation to listing. Download it free of charge.

Carscapes led to an exhibition at the Quadriga Gallery, Wellington Arch (2013-14), and won the following awards:

Built to Last? The Buildings of the Northamptonshire Boot and Shoe Industry (English Heritage, 2004)

Written with Ann Bond, Built to Last? was published in English Heritage’s popular Informed Conservation series. It examines the architectural heritage of the once-thriving boot and shoe industry of Northamptonshire, and was indebted to fieldwork carried out by Adam Menuge and Andrew Williams. I should apologise for the dreadful pun in the title: it seemed a good idea at the time. Some of the factories and workshops featured in the book have ‘lasted’ rather better than others. Built to Last? is out of print, but a free copy can be downloaded here.

Click here for reviews of English Shops and Shopping. The book won the following awards:

To read about ‘Bazaars and Bazaar Buildings in Regency and Victorian London’ have a look at this article, published in the Georgian Group Journal in 2006

I have also written Shopping Parades, an Introduction to Heritage Assets published on the Historic England website in 2016. It serves as a guide to assessments and can be downloaded free of charge.

The Workhouse: A Study of Poor-Law Buildings in England (English Heritage, 1999)

This book emerged from a project undertaken in the 1990s by the now (sadly) defunct Royal Commission on the Historical Monuments of England (RCHME), to identify and record hospital buildings throughout England at a time when many were closing. Cottage hospitals and workhouses were especially vulnerable at the time, as were the old ‘lunatic asylums’. The primary output of the RCHME project was English Hospitals, 1660-1948: A Survey of their Architecture and Design, edited by Harriet Richardson and published in 1998. I authored the chapters on military hospitals and workhouse infirmaries.

The Workhouse was more specialised than English Hospitals. It established a narrative for the evolution of poor-law institution sites, and – although no longer in print – has proved useful: over the last 17 years many illustrated examples have been demolished, but others – despite an inherent prejudice which, I think, is now fading – have been retained as housing or offices. The cover shows the Thurgarton Incorporation Workhouse (1824) at Southwell – rescued by the National Trust to become a popular visitor attraction known simply as The Workhouse. On the back of the jacket I illustrated the remains of Boston Union Workhouse – and only discovered in later years that my great-grand-aunt, Margaret Gerrie, had taught there between 1855 and 1864.

Boston Union Workhouse, by George Gilbert Scott, 1837, from the back jacket of The Workhouse

‘The English and Welsh Workhouses of George Wilkinson’ was co-authored with Nicholas Cooper and published in the Georgian Group Journal in 2004. 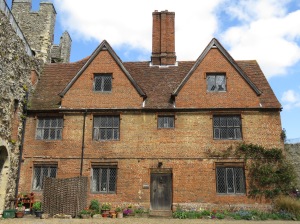 For a historic account of the 17th-century Red House (Workhouse) in Framlingham Castle, published in the Historic England Research Report Series, click here.