Lipton’s: ‘A Beautiful Study in White’

Posted on February 21, 2016 by buildingourpast 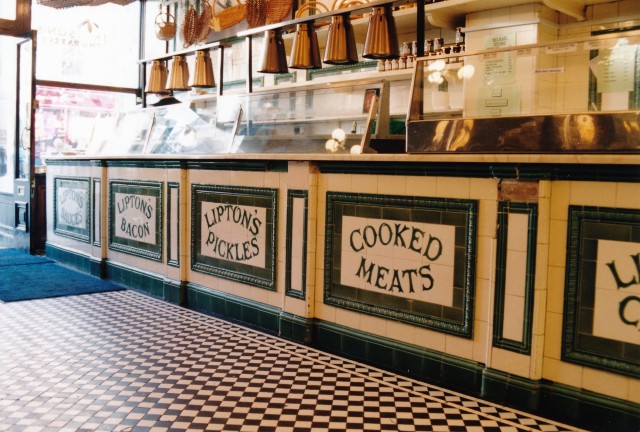 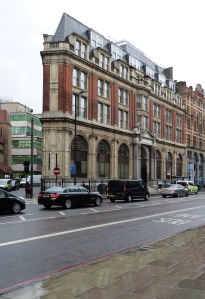 A self-made man, Sir Thomas J. Lipton (1848-1931) opened his first provision shop in Stobcross Street, Glasgow, in 1871. His shops multiplied, their openings trumpeted with stunts and fanfares, and Lipton quickly made his fortune. But it was his decision to grow, manufacture and sell tea – starting with the purchase of estates in Ceylon in 1889 – that made his name so famous around the world.

By 1889, Lipton had 150 shops, known as ‘markets’. When ‘Lipton’s Market’ opened in Cardiff in 1891 the façade was almost completely concealed by gigantic lettering proclaiming: ‘The Largest Tea and Provision Dealer in the World’. In 1896 Lipton’s new London headquarters, designed by Mark W. King, opened on City Road. This replaced older offices on nearby Bath Street. Illuminated throughout by electricity, the building accommodated 1,000 members of staff, including the architect’s department where the plans and specifications of shops were dealt with. It still stands next to Moorfields Eye Hospital, but has been modernised. 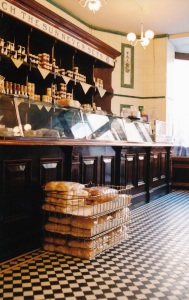 The Aberdeen Journal considered the new branch on Union Street worthy of description in 1908: ‘Magnificent oak fittings have been placed in the shop, while the artistic tiling and beautiful marblework complete a harmonious and pleasing scheme of adornment. A smart cash railway system has been introduced . . .’.

Lipton had 500 shops by 1919.  In 1927 it was decided to close unprofitable branches and to update the look of the shops. The Cornishman reported: ‘It is understood that the green-tiled shop fronts which for many years have been a familiar feature to Cornish shoppers, and indeed to shoppers in almost every town in Great Britain, are to disappear. These fronts – the recognised mark of a Lipton’s shop – are to be replaced by new fittings, equally distinctive, but more in keeping with modern ideas’.

A few years later, in December 1932, the North Devon Journal reported that the Barnstaple shop had been modernised: ‘The entire shop has, in short, been gutted from floor to ceiling, all the old wooden fixtures, plaster, and paper, being superseded by polished marble and mahogany counters, marble shelving, and an ornamental tiled floor, with walls and ceilings to correspond. The new scheme may be described as a beautiful study in white, and the appearance of the handsome shop is greatly enhanced by a series of new electric lamps, with flood lighting in the windows’. 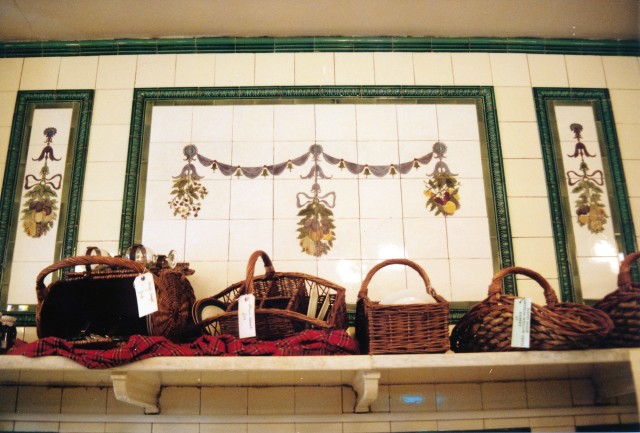 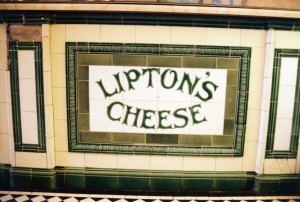 Lipton retained its separate identity and embraced self-service in the early 1950s: for example on Kirkgate, Leeds, in 1952. Most of its premises, however, remained small in comparison with contemporary Tesco or Sainsbury outlets. It never developed large superstores. In 1982 Allied Suppliers, including 600 Lipton shops, was sold to Argyll Foods. Gradually the shops were rebranded as Presto. The last 84 in the UK closed on 26 September 1986, though two branches remained open for a time in Gibraltar. 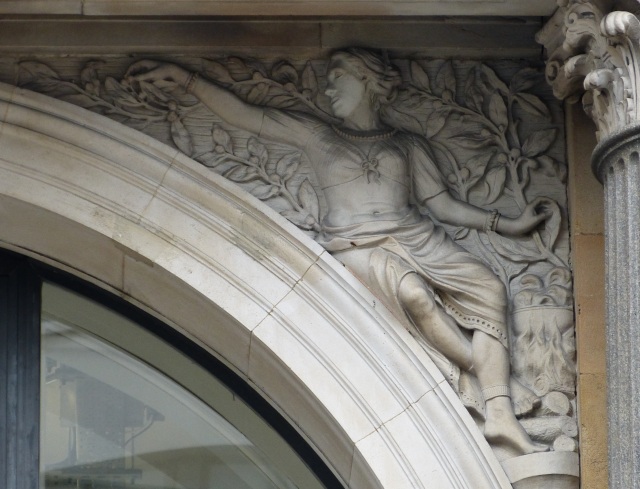 Spandrel of main entrance to Lipton’s offices on City Road (1896). The figure appears to be in Indian costume and is depicted against foliage – presumably tea leaves! (photo: R. Baxter) 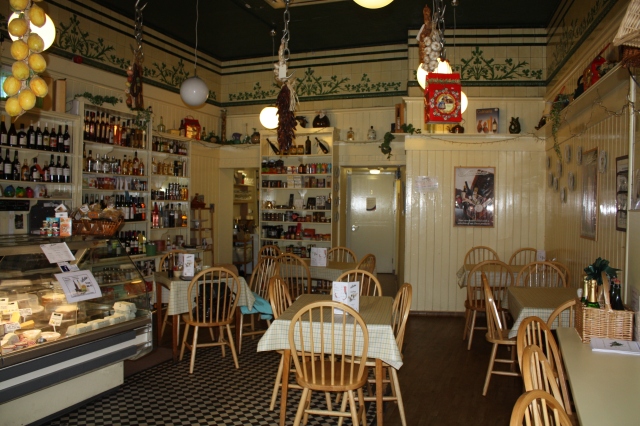 Just one historic Lipton’s interior is known to survive in Scotland. This is 16 Keptie Street, Arbroath. From local newspapers it is clear that Lipton occupied this shop from 1908 until 1927, when the business relocated to 152 High Street. The tiled interior – probably dating from 1908 – has been attributed convincingly to the tile layer James Duncan by Lindsay Lennie. It incorporates thistles and shamrocks. Incidentally, Lipton’s yacht was named ‘Shamrock’. 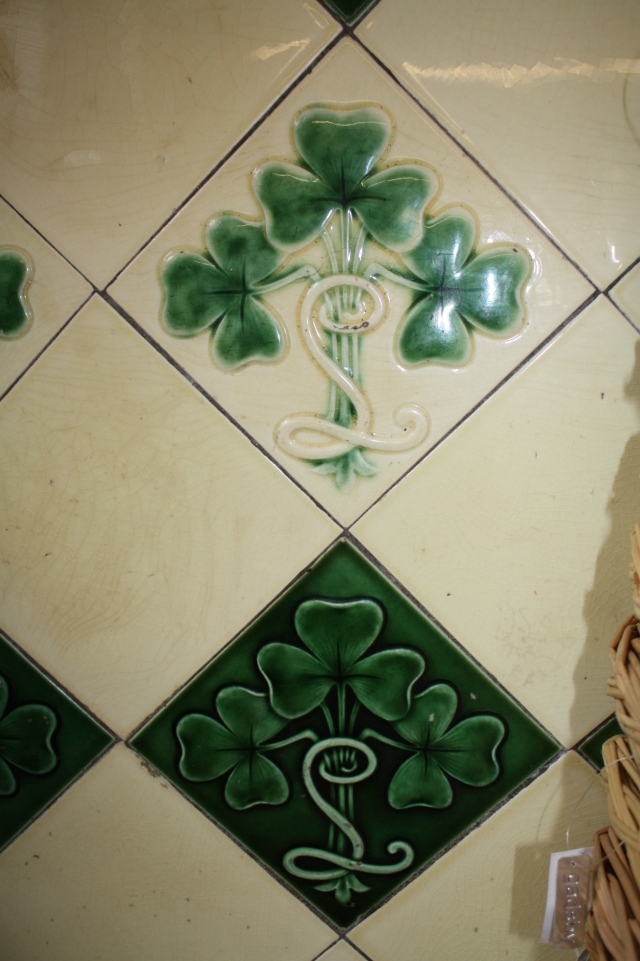 A detail of the tiling at 16 Keptie Street, Arbroath, with the letter ‘L’ for Lipton. Courtesy of Lindsay Lennie. 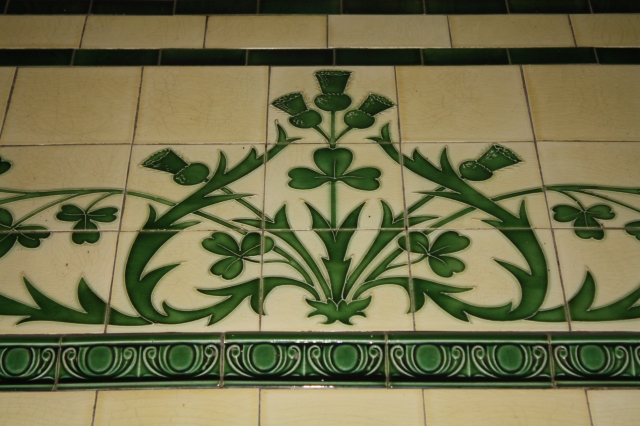 The best preserved Lipton’s shop in England is undoubtedly Jackson’s the Bakers, 7 Central Pavement, Chesterfield. A remarkable survival, probably from the 1910s or 1920s, this retains the shopfront and the interior, almost completely intact. Outside, there is a sash window to the left of the lobby entrance, and fixed glazing to the right, with mosaic tiles on the floor. The stall risers, tiled in dark green – perhaps the old style abandoned in 1927 (see above) – were damaged when the Lipton name was removed. 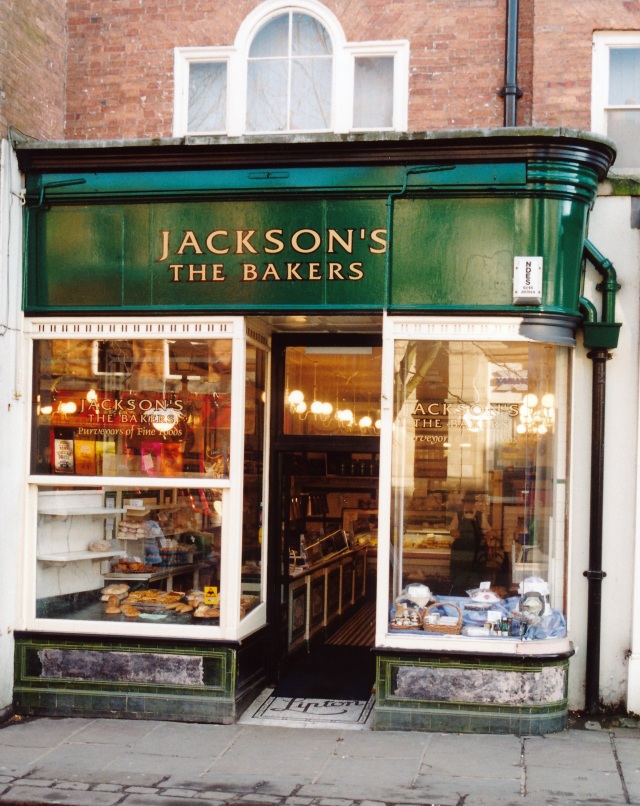 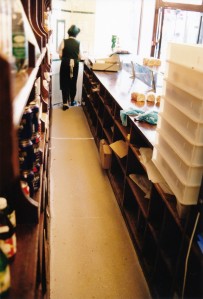 On the left-hand side, inside Jackson’s, is a long tiled counter, with marble slabs behind, for retailing fresh produce such as bacon, ham, eggs, cheese and butter. This is comparable with the counters in David Greig shops of the same vintage. On the right is a wooden counter, with wooden shelves behind, for the sale of groceries such as tea, coffee and preserves. Above this runs the slogan ‘THE BUSINESS ON WHICH THE SUN NEVER SETS’. The tiled walls are decorated with swags in green-tiled frames. According to the Tiles & Architectural Ceramics Society these tiles were probably manufactured at Wade’s Flaxman Works in Burslem. 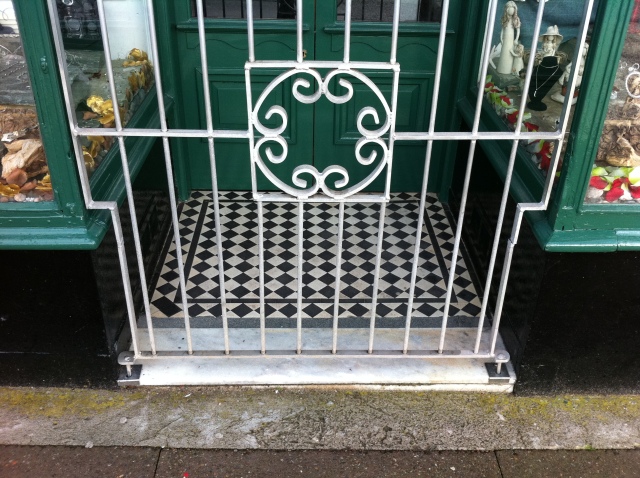 Lipton’s black and white chequer floor survives in Chesterfield. Identical tiles survive in the gated lobby of the former Stornoway branch, on the corner of Church Street and Cromwell Street. I have hazy childhood memories of the bright, hygienic interior of that shop, which truly was ‘a beautiful study in white’. The salesmen wore white shop coats and bustled about with pencils tucked behind their ears, cutting and weighing goods, wrapping them in white paper bags, and scribbling down the prices for the ‘girl’ at the cash booth to tot up. Memories of this shop flood back at the sight of the floor in Chesterfield. 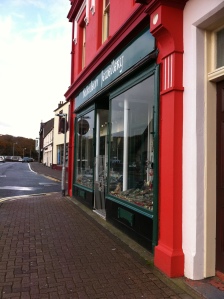 12 Responses to Lipton’s: ‘A Beautiful Study in White’