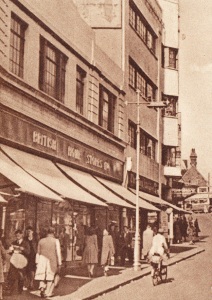 British Home Stores, commonly known as ‘BHS’, was registered as a private company in London in April 1928. The exact circumstances of its foundation remain mysterious, as do the personalities involved, but the intention from the outset seems to have been to develop a chain of variety stores in major shopping centres.

Some of the first branches opened in thriving London suburbs, starting with Brixton – where Marks & Spencer and Woolworth were already established – followed by Croydon, Harlesden and Ilford. The revamped Victorian building in which the Brixton branch opened still stands at 452-6 Brixton Road, on the corner of Dorrell Place, occupied by Superdrug. The branch on Church Street in Croydon – subsequently redeveloped by BHS in the early 1960s, before the firm moved into the Whitgift Centre around 1970 – appears to have been designed on the model of contemporary Woolworth stores.

The ethos of the day was to ‘buy British’, and the very name ‘British Home Stores’ appealed strongly to consumers’ patriotism. Within a few years the company was claiming that 96% of its goods was manufactured (or otherwise produced) in Britain. Principal lines included clothing, household goods such as lighting – which was also a Woolworth’s staple – and groceries. Most branches seem to have had a cafe from an early date, if not from the start.

When BHS was just a few months old, in December 1928, a controlling interest in the company (50%) was bought by a New York chain store proprietor, Abraham Herman Neisner (1884-1933). Neisner, who assumed the dual role of Chairman and Managing Director, wished to fashion the English chain along similar lines to his American stores, which traded as Neisner Brothers and displayed red and gold fascias. In this he was following in the footsteps of Frank Winfield Woolworth (1852-1919), who had developed a successful chain of 5 and 10 cent stores in America before starting his British chain in 1909. By 1928, Woolworth was entrenched on the British high street. BHS had a very similar business model, but sold goods within a broader price range – ‘3d. to 5s.’ rather than Woolworth’s restricted ‘3d. and 6d.’. By some accounts the price range originally adopted by BHS was ‘3d. to 1s.’, but Neisner raised it to fall in line with contemporary American variety chains.

BHS had seven branches by 1929, all overseen from the head office at Ivy House, 30 Newgate Street, London. One of the first to open outside London was at 38-40 Palmerston Road, Southsea; others followed in Portsmouth and Sheffield. BHS’s comprehensive rebuilding and modernising programme of the 1950s and 1960s has meant that few of its pre-war sites survive. A rare purpose-built example stands on Western Road, Brighton, now in the hands of Primark. Designed in 1930, with touches of both art deco and classical styling, this is comparable with the contemporary stores of C&A or Woolworth. Archive photographs show the building in the course of construction. It was sold by BHS in 1969. 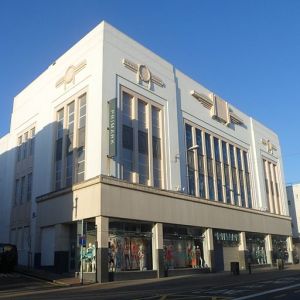 The severing of the American connection did not check the growth of BHS. There were 27 stores by 1935, and 37 by 1936. By the mid-1930s it had become a matter of course for BHS to build its own stores, whether properties were held freehold or leasehold. Several of BHS’s London stores were leased from Second Covent Garden Property Co. Among these was 140-142 High St, Sutton, which was rebuilt with an agreement that the Second Covent Garden Property Co would refund the cost of demolition and construction while BHS took an 80-year lease on the new building. The Sutton store was rebuilt yet again in the 1960s.

New branches were still chiefly in London – for example in Peckham, Kingston, West Ealing and East Ham – and major city centres in the south of England, such as Bristol. BHS already had a store in Sheffield, but from the mid-1930s additional outlets opened in the Midlands and the north of England, for example in York, Wakefield, Newcastle, Hanley and Leicester. The Newcastle branch occupied one wing of a building newly erected by the architects North & Robin for C&A. On more than one occasion BHS boasted that the heating lighting and ventilation of its new stores had been ‘scientifically treated’, though it is unclear exactly what was meant. 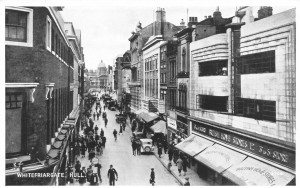 The George Hotel on Whitefriargate in Hull was rebuilt in a robust moderne style between April and November 1934, and the premises of the draper Frederick Matthew on Fishergate, Preston, were reconstructed between February and October 1935. In each case, the store occupied a single level, on the ground floor, with the stockroom and staff rest rooms (including a dining room and kitchen as well as cloakrooms) above, an arrangement just like contemporary Woolworth stores. The suppliers and contractors at Preston probably worked for BHS on a regular basis: the structural steel was by Rubery, Owen, the terracotta by the Leeds Fireclay Co., the bronze shopfront – which was remarkably like Woolworth’s – by the Cheltenham Shopfitting Co., and interior fittings by Mason’s. However, the company maintained that ‘when it is decided to build new stores everything is done to see that as much of the cost of materials and labour as possible is spent locally’. Once open, each store employed around 50 local people. 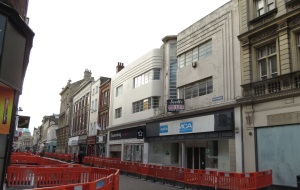 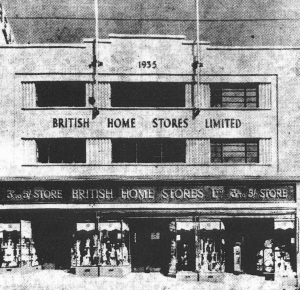 The Managing Director, Mr B. M. Rosoff, explained at the opening of the Preston store that “Before starting the day’s work, the whole staff gather round the music counter and enjoy ten or fifteen minutes’ hearty singing. It is found that this creates a happy feeling amongst the staff first thing in the morning, and dispels that ‘early-morning feeling’.”BHS branches, inevitably, grew progressively bigger. The store which opened on Listergate, Nottingham, on 21 February 1936 – the 39th in the chain – occupied two levels: ground and basement. It had 36 large counters and racks, with around 1,500 feet of display space. At the opening, Rosoff explained that sweets and foodstuffs were stored in a zinc-lined room to avoid contamination, and that the luncheonette counter was stocked with fresh food every day – something that evidently could not be taken for granted at the time! As at Hull and Preston, the staff dining and rest rooms were on the upper floor.

The Nottingham branch (now W. H. Smith) was just one of several BHS stores of the 1930s to be designed by the company’s staff architects and given a modern façade clad in cream glazed terracotta or faience. A couple of masts often crowned the elevation. In 1935-6 Shaws of Darwen manufactured tiles for the façades of stores in Stockport, Liverpool, Taunton and Birkenhead.

Growth paused briefly in 1937 while BHS underwent organisational changes. Amongst its new initiatives at this stage – shortly before Woolworth took a similar step – was the introduction of a staff pension and life assurance scheme.

Expansion resumed in 1938, with new branches in Sunderland and Swansea, and extensions to the older stores in Sheffield, Bedminster and Southend. This phase in the development of the company would soon, of course, be checked by the outbreak of the Second World War.