At the end of 1939 British Home Stores (BHS) was operating 58 stores in England and Wales. Two stores were still under construction in the early war years and one of these – in Lewisham – was requisitioned and not released to BHS until 1950. Other stores, and part of the head office, also seem to have been taken over by the Government for the duration.

Several BHS branches suffered through enemy action: eight were destroyed and 25 damaged, leading to a post-war claim for damage amounting to £103,930. Four of the destroyed stores were replaced by temporary premises which traded through the late 1940s and early 1950s.

Like its rivals, BHS experienced considerable turmoil during the war. The company had not been involved in manufacture (unlike Marks & Spencer and C&A), and found that its supply chain was thoroughly disrupted, especially in the field of drapery goods. Additionally, staff joined the forces (in fact, 20 were killed), air raid precautions affected working hours, and government policies such as purchase tax and rationing caused headaches for the management team. Not surprisingly, BHS had to abandon its 5s. maximum price limit. Throughout the 1940s, the catering side of the business, especially the serving of hot meals, assumed great importance. 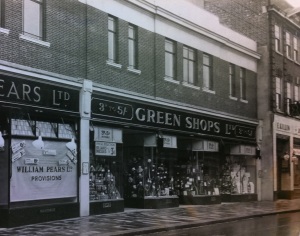 Two important mergers allowed BHS to expand in the 1940s. First, in 1943, BHS acquired Green Shops Ltd. This was yet another variety store chain with a 3d. to 5s. price range. It had been started up by an American chain store proprietor,  H. L. Green of New York. Formed in 1932, this company had expanded quickly by taking over several US chains before setting up in the UK in 1935. The first Green Shops in the UK opened in Hounslow and East Ham, followed by Wood Green and Bedford. By end of 1943, all but two Green Shops had been rebranded.

Then, in 1944, BHS took over Hills & Steele Ltd, a chain store subsidiary of Great Universal Stores Ltd., known until 1938 as New Universal Stores. This had nine outlets including Newport, Wolverhampton, Dudley, Dundee, Hull, Lowestoft, Exeter and Lincoln. These shops operated a price range of 3d. to £5. As with Green Shops, the majority were rebranded as BHS, but in this case the process was more protracted, perhaps because the product range was not such a close match. Hills & Steele was not fully integrated with BHS until 1950.

In 1947 BHS took possession of a new office block: Marylebone House at 129-137 Marylebone Road, London. A cafe was installed there for employees in 1948, and around the same time a training scheme was introduced. Marylebone House was extended in 1965. 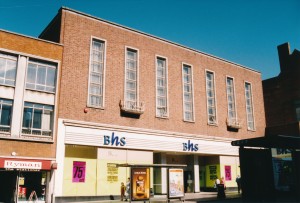 The post-war building licencing system meant that BHS could not resume normal expansion until 1954, but in the meantime its architects and estates departments undertook as much forward planning as possible. They participated in a number of prioritised reconstruction schemes, primarily in blitzed city centres such as Southampton (store begun 1951; opened 1951) and Exeter (store begun 1950; opened 1953). In addition, several sites were acquired for future development, for example in Cardiff, where a store opened in 1955 on a site bought in 1952. By now, through a deliberate policy of property sales, most stores were leasehold, on 99-year leases, rather than freehold.

BHS’s chief architect at this time was G. W. Clarke, who generally worked alongside W. S. Atkins & Partners, as consulting engineers. The stores – like Woolworth’s buildings – were composite structures, with steel frames and concrete floors. Clarke sometimes appointed local architects. At first, like C&A, BHS retained the narrow vertical window bays and margin-light glazing that had characterised high street façades in the 1930s, but by the end of the 1950s Clarke had embraced a modified form of curtain-walling. This architectural approach became firmly associated with BHS, with framed curtain wall panels – like giant TV screens – dominating the frontages of many stores. 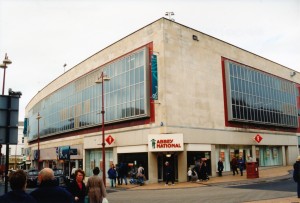 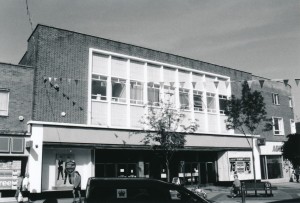 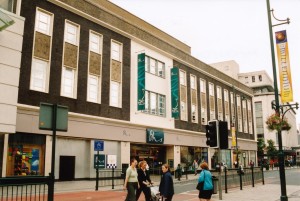 Amongst the new stores built in the late 1950s were York (1957), Blackpool (1957), Middlesbrough (1958; particularly large at the time, with 29,000 sq ft) and Crewe (1959, built by Cubitts). The most important stores in this period, however, were erected in Birmingham and Liverpool. That on New Street, Birmingham, regarded as the ‘largest and most important store to date in our chain’, opened in May 1958; escalators were installed in 1966. On Lord St in Liverpool, in 1959, part of the upper floor had to be cantilevered over an existing jewellery shop; this was extended in 1967. 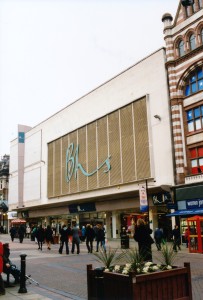 Meanwhile, sales methods were changing and like many other retailers BHS, in 1957, embraced self-service.