The Legacy of David Greig: Part 2

Posted on September 6, 2016 by buildingourpast

Several former David Greig shops – or fragments of shops –  have come to my attention since publishing the story of this extensive London-based provisions chain in The Legacy of David Greig. Here is a selection.

This small shop – now ‘The T Shirt Shop’ – occupies a Victorian building at the junction of Meadow Street and Orchard Street, on the edge of the town centre. David Greig seems to have occupied these premises from the 1920s, and several elements of the shopfront and the internal shopfitting have survived.

The frontage displays Greig’s characteristic orange-yellow and ox-blood coloured tiles, with the tube-lined ‘DG’ monogram and thistle motif. Smaller thistles are carved on the wooden spandrels of panels flanking the entrance. The modern fascia may conceal original lettering, but just the sign for ‘Provisions’, with its gilded lettering, is visible. The interior retains Greig’s black and white chequered floor and some meat rails. If decorative tiling survives inside the shop, it is hidden from view. 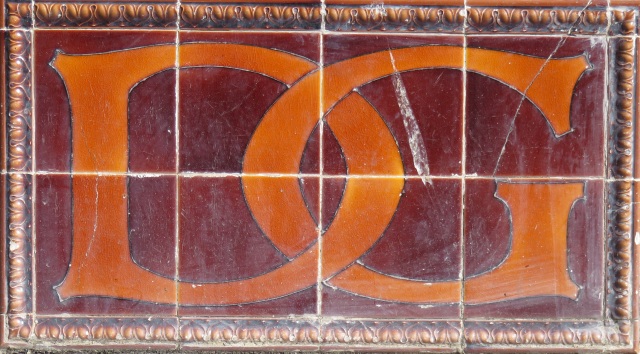 To all intents and purposes the sole relic of David Greig’s shop at 15 Bridge Street, Evesham, is one of the firm’s standard consoles, with monogram and thistle. These consoles bracketed the fascias that crowned Greig’s shopfronts and are often the only remnants of the shops to survive. The modernised premises at Evesham are occupied by Thomas Cook.

At 18 London Street, Basingstoke, the form of David Greig’s shopfront is intact, complete with a pair of thistle consoles. This branch had polished grey granite stall risers and pilasters and is now a bar and restaurant.

Seemingly rebuilt or remodelled by David Greig in 1924, as commemorated in a date stone on the façade, this branch is now an Italian restaurant called ‘Santore’. As usual, the consoles which flanked the signboard are the principal part of the shopfront to survive.

1 Response to The Legacy of David Greig: Part 2