Cheap Meat for the Masses: Multiple Butchers in Britain

Posted on November 7, 2016 by buildingourpast

The importation of meat from North America to Britain started in the 1860s and accelerated in the 1870s as refrigeration improved. One of the leading shippers was Timothy C. Eastman (1821-93) who owned a huge abattoir, or ‘killing yard’, in New York. From around 1875 he exported large quantities of ‘dead’ (that is, frozen) American beef to England. He was joined in his business by his son, Joseph.

The Eastmans’ Scottish agents, from 1877, were the butchers John Bell & Sons of Glasgow, a firm established in 1827. Bell & Sons had earlier imported live cattle across the Atlantic but now adopted the very latest refrigeration technology for ships. Spearheading the sale of imported dead meat within Britain, the brothers Henry and James Bell set up a chain of butcher’s shops in 1879. Ten years later they controlled 330 shops which traded as The American Fresh Meat Co. or Hill & Dale Ltd. Unlike traditional butchers’ shops, these multiples did not have their own slaughter houses; there was no need, since everything was brought in from wholesalers.

The Bells’ target clientele was the working class, which benefited from the availability of cheap foreign meat. In June 1889 they set up Eastmans Ltd., with Lord Greville as Chairman. This new venture incorporated Timothy and Joseph Eastmans’ company, and appropriated their name. In 1900, however, with interest in other markets – primarily Argentina and Australia for beef and New Zealand for lamb – growing (and America becoming correspondingly less competitive), Eastmans Ltd. liquidated the American company. It relied, thenceforth, on English wholesalers. 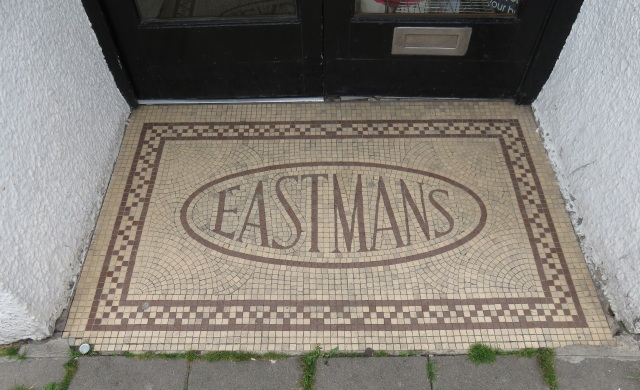 In 1903 Eastmans Ltd. had 205 retail shops and cold stores capable of holding 310,000 carcasses of mutton; by 1912 the number of shops had risen to 1,400. The five years preceding the Great War, however, were lean years for the imported meat trade, due to rising prices and slack demand. For Eastmans Ltd., the war proved disastrous. Between 1914 and 1917, 495 shops closed. Most of the employees joined the forces, supplies were disrupted, and turnover was greatly reduced. In August 1920, while Eastmans was recovering from this setback, the Vestey Brothers, owners of the Union Cold Storage Co., stepped in and bought the company.

The Union Cold Storage Co. had been founded in 1897 and established the Blue Star Line in 1911. By 1923 it had 51 cold stores and freezing works abroad and at home, and a large fleet of refrigerated vessels. Beef was imported from Argentina and lamb from New Zealand; Australia was another important market. In 1923 the firm acquired the British & Argentine Meat Co. Ltd. (which had been formed in March 1914 through an amalgamation of two other chains of butchers’ shops: James Nelson & Sons Ltd. [with 1,000 shops] and George Drabble’s River Plate Meat Co. [with 440 shops]). The Vesteys now controlled 2,400 ‘retail shops, depots and market stalls in this country’, as well as factories and wholesalers.

Other chains acquired by the Vesteys in 1923 included W. & R. Fletcher Ltd., the Argenta Meat Co. Ltd., and J. H. Dewhurst. A few years later they absorbed the Empire Meat Co. The Vesteys thus became the largest meat retailer in the world, with an empire governed from an office in Smithfield Market, London. Of the numerous large meat multiples that existed before the war, just the London Central Meat Co. remained independent. In addition, the butchery departments of co-operative societies all over the country did a roaring trade. The London Co-operative Society alone, in 1934, had 159 shops plus an abattoir and a ‘meat products’ factory. It had begun to import chilled, as well as frozen, meat from around the world. Like some other multiple butchers, the London Co-operative Society sold English meat alongside imports.

Ultimately, it was the Dewhurst brand (and its equivalent Alex Munro in Scotland) that came to dominate British shopping streets into the 21st century. Dewhurst’s had been founded in Southport, Lancashire, by John Henry Dewhurst whose grandfather, John Dewhurst, was a ‘master butcher’ employing a man and two boys (Census 1871).

In the 1920s multiples like Dewhurt pioneered hygienic plate-glass frontages for butchers’ shops. Previously butchers had preferred wide sash windows that could be raised to reveal a display of meat on a marble slab. A typical example of an inter-war Dewhurst shop survives in Greenwich. The stallrisers were of pearl granite rather than wood, which might absorb water and blood.

Dewhurst made  extensive use of decorative tiling. Many branches were brightened by panels depicting farmyard animals, manufactured by Carters of Poole. Around 1950, however, Dewhurst adopted chrome and plate-glass shopfronts, and established a uniform interior décor of white tiles with a black border. 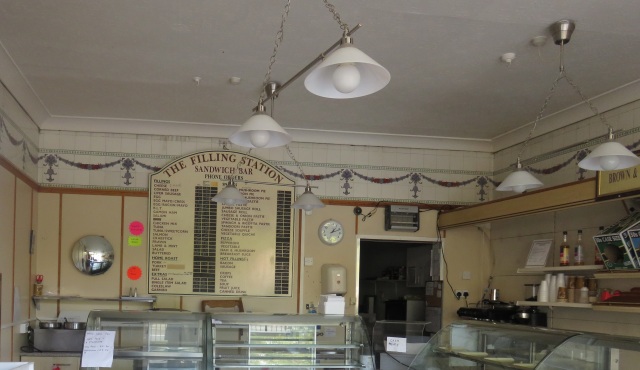 Dewhurst the Master Butcher, Newport, Isle of Wight, in 2000

In 1977 there were 1,400 Dewhurst shops in the UK, and in 1980 they were rebranded as ‘Dewhurst The Master Butcher’. There were just 360 branches, however, by March 1995, when the company went into receivership along with its holding company, Union International. A management buy-out with Asda Property Holdings rescued around 210 shops: Asda bought the freeholds and leased the shops back to Dewhurst Butchers. These were gradually updated in the early 2000s

In 2005 Dewhurst was bought by West Country butcher Lloyd Maunder. A year later Dewhurst closed 60 shops and called in the administrators to help sell the remaining 35. Like so many other meat multiples, it vanished from the British shopping scene, bowing to the superior might of the supermarkets.

6 Responses to Cheap Meat for the Masses: Multiple Butchers in Britain