Posted on December 17, 2016 by buildingourpast

Traditional tobacconists sold combinations of snuff, tobacco, cigars, cigarettes and pipes, often alongside confectionery, stationery, newspapers, or even a barber’s shop. They signalled their presence on the high street in different ways. For example, bottles, jars and canisters once lined shallow shelves inside their windows, rather as carboys filled with coloured liquid signposted chemists’ shops.

Much more conspicuous than rows of tobacco jars were the carved wooden figures that stood on pavements outside tobacconists’ doorways, usually representing American Indians with skirts made of tobacco leaves or Scottish Highlanders in kilts. The Highlanders may have been a nod to the Scottish invention of a mill that ground tobacco into snuff. The association of these figures with tobacconists began in England and Holland in the 17th century and later spread to America, where they are called ‘Cigar Store Indians’. Despite being highly collectible, some figures still fulfil their original purpose. 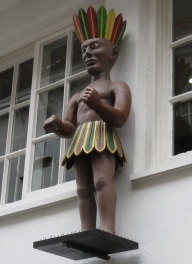 Often there was little in their design to distinguish tobacconists’ shopfronts from those of other traders. Nevertheless, long after the telling scent of tobacco has dissipated, some visual clues remain. For example, stainless steel cigarette dispensing machines might survive on frontages. These usually date from the middle of the 20th century and were stocked with specific brands such as Player’s.

Some fine tobacconists’ signs are still on show, with the favourite motif undoubtedly being the pipe. Signboards – perhaps predictably – were often tobacco coloured, or reddish-brown, with gilded lettering. This was normally V-cut and covered with enamelled glass. Alternatively, lettering could be painted onto the back of the glass.

Until recent years fine glass signage with gilt lettering survived at G. F. Smith & Sons (est. 1869), 74 Charing Cross Road, London. Regrettably, after closure in 2011 all character was stripped from the shopfront – a great loss to London’s streetscape. Signage of similar vintage is, thankfully, still treasured in other towns and cities.

Sometimes a large painted advertisement signalled the tobacconist’s shop from afar. Often prominently sited on the gable end of a building, these promoted popular brands such as Wills’s Gold Flake. As well as these ‘ghost signs’, enamel cigarette advertisements occasionally survive in situ on shopfronts – though many have been removed and sold to collectors. The profusion of brand signs in this sector is accounted for by manufacturers giving retail tobacconists ‘grants’ for window dressing. 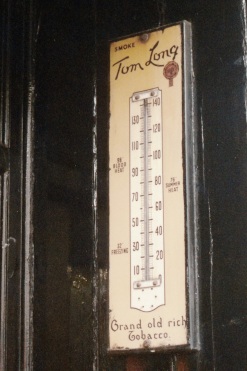 One of the Best: Fribourg & Treyer

Several venerable tobacco shops remain in London. Best of all, from the spotter’s viewpoint, is Fribourg & Treyer at 34 Haymarket (before street numbering ‘at the sign of the rasp and crown’, a rasp being an implement used for snuff). A Peter Fribourg was documented at this address in 1751, and the firm of Fribourg & Treyer (renamed Evans & Evans during the Great War because ‘Fribourg & Treyer’ sounded foreign) remained here until 1982.

At some point in the late 18th century, Peter Fribourg or Gotleib Augustus Treyer, who took over the business in 1780, installed the present shopfront. It is a thing of beauty, with round bow windows to either side of the shop entrance. One of the small window panes, to the right, is painted in gilt letters (which are now degraded) with an advertisement reading: ‘Fribourg & Treyer Tobacconists to His Majesty and Purveyors of Foreign Snuffs to the Royal Family’. The King in question was George IV, who is known to have been a regular customer. Snuff was the mainstay of the business for its first century, with cigars and cigarettes becoming just as popular in the 1850s. By 1900 these were outselling snuff.

Over the years several retail chains have specialised in tobacco. One of the first was Salmon & Gluckstein, which had 140 branches by 1902 when it was taken over by the Imperial Tobacco Company. In 1937 Salmon & Gluckstein acquired Bewlay & Co. (est. 1780), and in 1955 rebranded the shops as House of Bewlay. These adopted distinctive Gothic lettering and medieval-style shopfronts of unpainted timber. Because of their quality, it is likely that several House of Bewlay shopfronts have survived and might be identified by avid shop spotters. That in Chester, for example, became Thorntons.

For much of the 20th century one of the most ubiquitous national chains was Finlay & Co, later trading as Finlays. Like many other tobacconists, the shops sometimes included hairdressing salons and eventually sold confectionery and newspapers alongside tobacco. Finlay’s closed in 1989. Others included Dunhill, which began in 1907 when Alfred Dunhill diversified from ‘Motorities’ (accessories for motorists), and John Hollingsworth, a small Midlands chain which used to display a pipe on its fascias. 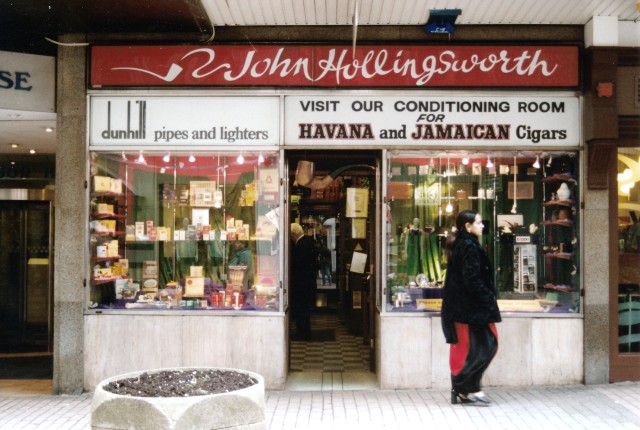 This is the second in a series, ‘A Spotter’s Guide to the High Street’, published here at http://www.buildingourpast