Posted on April 8, 2017 by buildingourpast 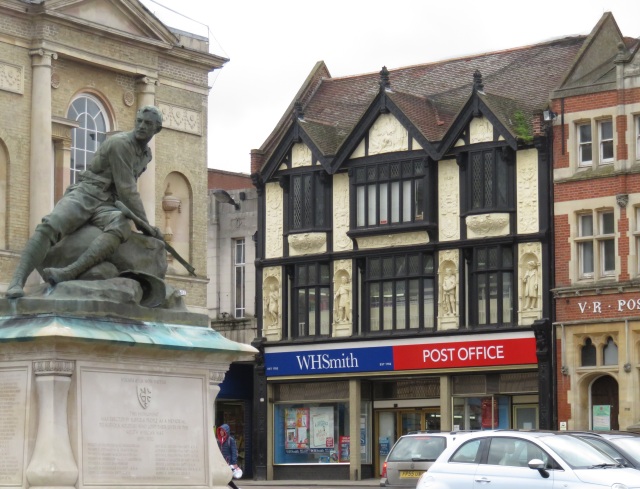 Michael Vyne Treleaven (1850-1934) held the position of Boots the Chemist’s in-house architect for over a decade in the early 20th century, and was responsible for designing the company’s well-known mock-Tudor shops.

Treleaven came from the parish of Poughill, near Bude in Cornwall. In 1871 he was described as a wheelwright, but later in the same decade – following his marriage to Emma Deacon of Liskeard in 1876 – was variously identified as ‘builder’, ‘carpenter and joiner’ or ‘builder and contractor’. Shortly after constructing the Methodist Free Chapel in Bude in 1879, he was declared bankrupt. This called for a fresh start. Two years later, aged 31, he was living with his wife and young daughters in Brixton, south London, and working as a ‘builder’s foreman’.

There is no evidence that Treleaven received any formal training as an architect. Nevertheless, by 1891 – when he was identified as a ‘Surveyor (Builder)’ in the Census –  he had begun to design buildings. In that year he was responsible for the West Cliff Boarding House and Hotel in Southend, designed for William Stubbs. This five-storey red brick block (now rendered and painted white) contained few hints of the direction Treleaven’s work would take once he began to work for Boots.

In 1892, a year after designing the West Cliff Boarding House and Hotel, Treleaven became a Freemason, joining Stanhope Lodge in Camberwell. The membership register of the United Grand Lodge of England recorded his profession as ‘architect’. He was ‘excluded in arrears’ in 1896.

Treleaven appeared in Boots’ wages book in 1898 and two years later he succeeded James Young as Boots’ architect. Although Jesse Boot had been engaged in building work since the 1880s, it is unclear how long the company had employed an architect. Boot first established a Shopfitting Department in 1883, when he engaged two joiners. By 1892 this department was located on Island Street in Nottingham and managed by a man named William Fawcett. It was reported that ‘All the fittings for the Warehouse, Laboratory and Branch Establishments are manufactured on the premises’ (Derby Daily Telegraph, 15 August 1892, 4). The Building Department was founded in 1884, when Boot bought the business of his builder, Alf Fisher of Red Lion Square. An architect was probably appointed after 1892, when the new premises on Pelham Street, Nottingham, were reportedly ‘specially built from the designs of the Managing Director’. In other words, Jesse Boot himself was claiming some credit as an architect at this time. One of his acquaintances remarked: ‘nothing in life gave Mr Boot so much pleasure as building and, if it could not always be new buildings, then alterations’ (Morrison 2003, 210).

During his years with Boots, Treleaven must have worked closely with the Nottingham architect Albert N. Bromley, who enjoyed a lengthy association with the company. Bromley was responsible for Boots’ neo-Jacobean style terracotta-fronted shops of the 1890s and early 1900s. Treleaven, however, is more associated with Boots’ ‘black-and-white’ fronts, the mock-Tudor shops built in the decade prior to the Great War. Whether or not Treleaven came up with the original concept – and in this he may well have been steered by the aesthetic tastes and interests of Jesse and Florence Boot – he signed many surviving plans and drawings for these buildings and must be accepted as their architect.

It is difficult to fathom how Treleaven, with his scant experience as an architect, came up with such a sophisticated approach to commercial house style. He did, however, train as a carpenter or joiner and may have developed an interest in structural timber in his youth. Moreover, Boots had taken on a couple of genuine timber-framed buildings before beginning to erect new mock-Tudor fronts. These included premises in St Albans which had been taken over by the company and restored in 1900. It is unlikely, however, that this triggered an interest in timber-framing, since St Albans did not have exposed framing. The timber fronts belong to a widespread fashion of the time, seen in important urban stores such as Goodall’s in Manchester (1899-1902) and Whittaker’s in Bolton (1906-07), possibly inspired in the first place by the rebuilding of medieval shops in Chester, where Boots leased a property at 24 Eastgate Street. Significantly, this Chester shop had Venetian-style oriels, a distinctive feature later used to good effect by Treleaven.

In 1903 Treleaven submitted a scheme for a timber-framed front at 43-44 High Street, King’s Lynn: the building standing on this site today does not conform to the surviving design, and is not typical of Boots’ timbered fronts, yet it was certainly occupied by the company by 1908. It can probably be regarded as an early experimental venture in this style, and seems to have been the first to be completed.

Many of these buildings had oriel windows, not unlike those of Sparrowe’s House in Ipswich, while others had plain mullion and transom windows with leaded lights and stained glass panels. The infill panels of the walls were often covered in plaster decoration, and the timbers incorporated carvings of grotesque and comical figures. 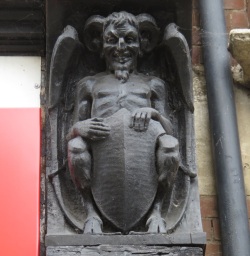 The stone or plaster sculpture that adorned many of Boots’ Tudor-style façades was probably made by Gilbert Seale & Son of Camberwell in south London. At least, Seale is firmly documented as the sculptor of the statues at Bury St Edmunds (1911) and Peterborough (1912), and also, according to the PMSA, at Kingston-on-Thames (1909). There is a good chance that this prolific architectural sculptor, modeller and plasterer decorated the frontages of many Boots branches before the Great War. Seale did not have a monopoly, however: the oak statue of Bishop Leofric at Exeter is known to have been carved by Harry Heme & Son of Exeter.

Records reveal that Treleaven and his family lived successively at two different addresses in Beeston, moving in 1902 from Lindon Grove to 228 Station Road, where they remained in 1912.

It is likely that Treleaven left Boots’ employment in 1912-13. In 1913 he designed part of Elliston & Cavell’s department store (later Debenham’s) on Magdalen Street in Oxford (Sherwood & Pevsner, The Buildings of Oxfordshire, 1974, 313). This ashlar-fronted building adopted a Gothic style, reminiscent of Boots’ in Edinburgh (1912) – quite different from the neo-baroque style which was popular for shops at this time. It had arched window heads, mullions and transoms, panelled pilasters and consoles, and medieval-style relief decoration.

In 1914, when Boots’ ‘black and white’ Gloucester shop opened, the architects were reportedly Bromley & Watkins, not Treleaven. Bromley had been identified in the local newspaper as the architect of Boots in Shrewsbury (1907), and so had some experience of this approach. Gloucester was one of the last ‘black and white’ stores to be built by Boots – only that in Evesham might have been completed later. Interestingly, there followed a short revival of the earlier terracotta-fronted store type, notably at Birmingham (Bull Street, 1915-16) and Southend (1915). It is as if Bromley was reasserting his authority following Treleaven’s departure.

In 1919 F. W. C. Gregory became Boots’ in-house architect. Treleaven had become architect to Holsworth Rural District Council and was habitually using the initials MSA (Member of the Society of Architects) and FIA (Fellow of the Institute of Architects) after his name. He died in Windsor, where he had presumably retired, in 1934.