Posted on August 1, 2017 by buildingourpast

Just as pawnbrokers signal their presence with three suspended balls, and barbers have their red and white striped poles, so jewellers, clockmakers and watchmakers have traditionally attracted attention with elaborate projecting clocks, turret clocks or time balls. Examples can be found on high streets throughout the British Isles. You just need to look up! 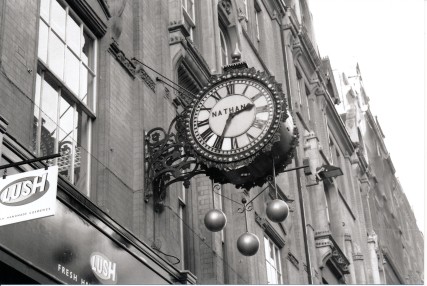 Nathan’s moved from Union Passage to Corporation Street, Birmingham, in 1887. It’s said that they brought their old clock with them. The three balls indicate that they bought old gold. Photo: 1999.

Some jewellers were particularly ambitious with their public timepieces, seeking to outdo the local competition. They wanted something eye-catching and novel.

The enormous clock projecting from John Bull’s former shop on Bedford’s High Street is topped by a golden bull with a ring through its nose, and has bulls’ heads on the sides. A bull is one of the conventional symbols for butchers’ shops, but here (obviously!) refers to the proprietor’s name. Nevertheless, it is intriguing to discover that in 1817 Bull started out, inauspiciously, in an old butcher’s shop near Ram’s Yard, with slaughter houses at the back (Bedfordshire Times & Independent, 5 April 1940, 12). 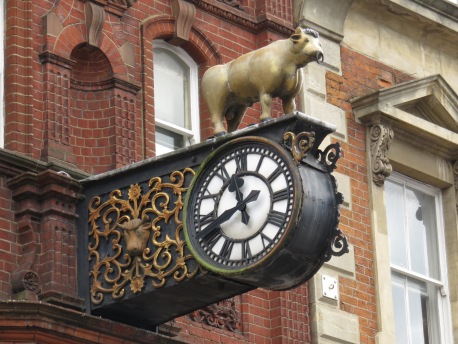 Bull was, primarily, a clockmaker, watchmaker and gunmaker. His sons took charge in the late 1860s and branched out, becoming ‘goldsmiths, silversmiths, jewellers, cutlers and opticians’. They even repaired umbrellas and parasols, and were the Bedford agent for Mappin & Webb. The clock with the golden bull was probably added when the shop was rebuilt in 1878. 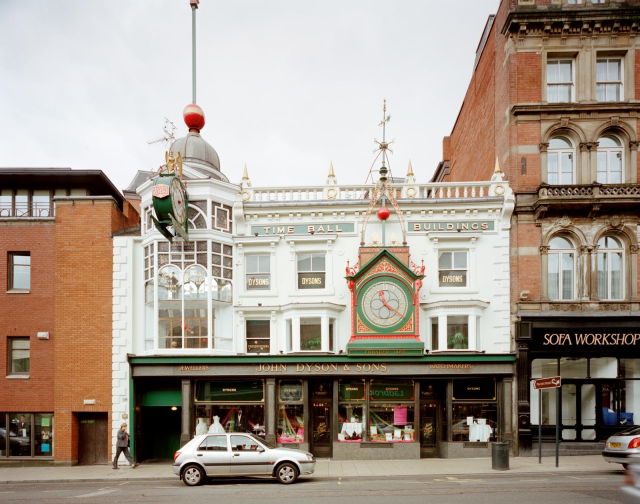 In 1877, on Briggate in Leeds, the jeweller John Dyson installed an electric time ball which dropped at 1pm each day ‘by a special current of electricity direct from Greenwich’ (Leeds Times, 29 September 1877, 5). Ten years later, in 1887, Dyson replaced it with a much larger ball – 3ft in diameter – on top of a domed bay window. This included a new projecting clock with a wooden figure of Father Time. Originally Father Time had an hour glass which turned ever hour, as well as the customary scythe. 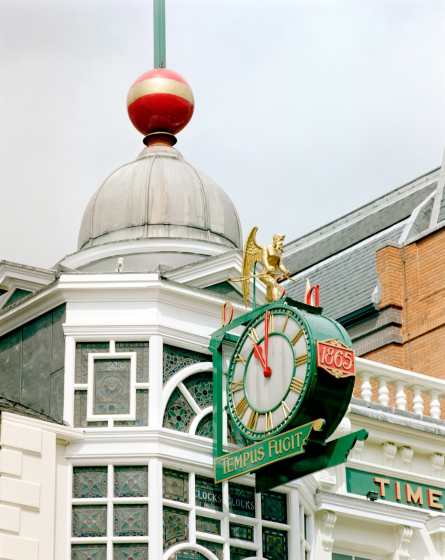 Dyson’s time ball was one of the largest in the country, but it was not unique: in 1873 visitors to Hull were urged to see the jeweller James Scott’s three-faced illuminated clock and gas-powered time ball at 4 Market Place (Hull Packet, 1 August 1873, 1). Another, presumably much smaller, example could be seen in the window of the jeweller and optician Henry Steer in Derby in the 1870s. In Bedford, John Bull’s sons installed a ‘Time Ball Figure’ in their window in 1888 – they entered into a five-year contract with the Postmaster General to receive the current from Greenwich, and offered to set watches to the correct time free of charge (Bedfordshire Times & Independent, 7 July 1888, 1).

Time balls remained fashionable for decades. In 1908 Preston’s installed a gilded ball on a mast above its corner premises on Deansgate in Bolton. Like many others, this dropped at 10am each morning. It was slowly wound up at 9am the following day to prepare for the next drop, and was considered the ‘latest addition to Bolton’s civilisation’ (Bolton Evening News, 8 May 1908, 5). Preston’s closed in 2016.

G. A. Baker’s novel clock on Southgate, Gloucester, was made in 1904 by Niehus Bros of Bristol. It presented a tableau of five automata – Father Time pulled a rope to ring the hour bell while figures representing England (John Bull), Scotland (‘The Cock o’ th’ North’), Wales and Ireland rang the quarters (Gloucestershire Chronicle, 26 November 1904, 3). These figures were made by the chief clerk to the Gloucester Diocesan Registry, Walter J. Lifton, who was also an amateur artist. The hour bell is suspended from a projecting clock, attached to the building by ornate iron brackets, with a small gilded ball on top – perhaps a notional time ball! 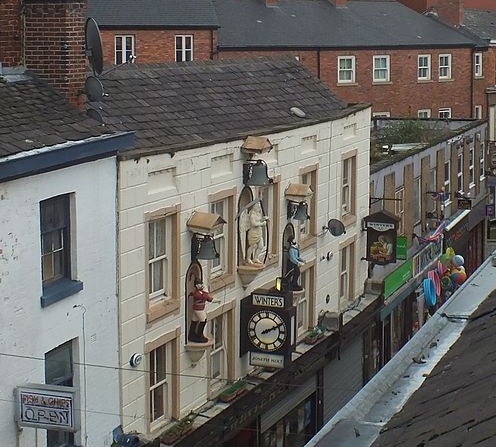 Baker was not the first jeweller to install automata. By the early 1870s several figures, including Gog and Magog, adorned the frontage of the watch establishment of Sir John Bennett Ltd. on Cheapside in London. The tableau, with clockwork and bells, was dismounted and shipped to America for Henry Ford in 1929. Another jeweller’s façade with automata was Jacob Winter’s in Stockport, now a pub. Around 1900 three figures were set in niches below bells. They depicted Old Father Time, a soldier and a sailor.

Some jewellers preferred a turret clock – perhaps more visible from a distance, though not easily viewed by window-shoppers. A turret clock and cupola over a modest mid-20th century parade of shops on the corner of High Street and Lower Kings Road, Berkhamsted, bears the name of the jeweller De Lisle & Sons. Like most of the clocks illustrated here, it has Roman rather than Arabic numerals.

No account of jewellers’ clocks is complete without mention of Newcastle’s golden girl, who symbolises ‘Progress’. Dating from 1935, she braves the chill winds of the North-East by posing with her arms upstretched atop a square Rolex clock on the corner of Pilgrim Street and Blackett Street, over Northern Goldsmiths’ shop. The sculptor was Alfred Glover, and the material is gilded iron. Northern Goldsmiths advertised their presence ‘under the golden clocks’, just as H. Samuel did in pre-war Plymouth. 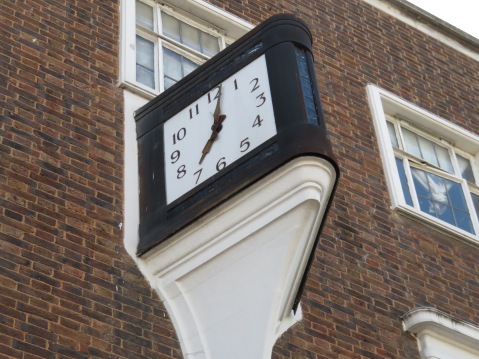 Unfortunately, the clocks of few post-war jewellers have managed to compete with those of their inventive – and sometimes over-the-top – predecessors. A symptom, perhaps, of the increasing separation of manufacturing and retailing in the jewellery trade.