Cambridge is rich in historic shopfronts. Here are a few interesting examples to look out for on shopping trips in town!

Surprisingly, the elegant art nouveau shopfront at 21 Market Street, in the heart of Cambridge’s shopping centre, belonged to a local dairy. 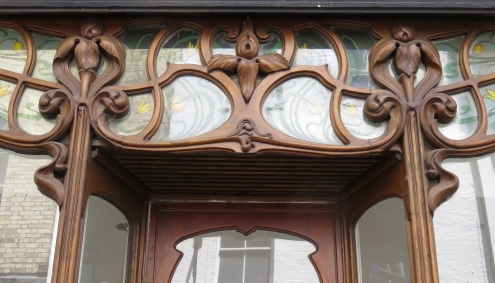 The occupant was The Stetchworth Dairy, a business which expanded from a dairy farm in Stetchworth, south of Newmarket, to encompass additional farms and a chain of shops in neighbouring towns such as Bury St Edmunds and Cambridge. The branch on Market Street opened in 1901 and was managed for many years by Mr Charles Alder.

Despite having curvaceous glazing in a style more usually associated with the Belle Époch preceding the Great War, this shopfront seems to have been installed around 1923. 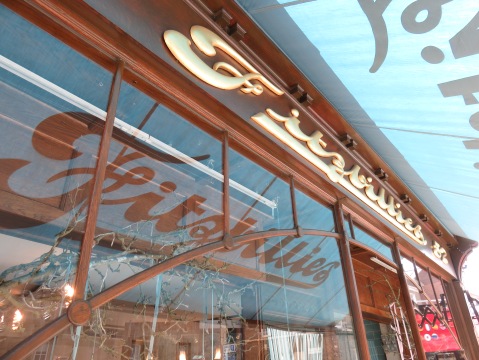 Another lovely art nouveau style shopfront in Cambridge belongs to Fitzbillies at 52 Trumpington Street. This shop was opened by the bakers E. & A. Mason in October 1920. It was damaged by fire in 1998 and later restored to a semblance of its former glory. Fitzbillies is especially famous for its Chelsea buns.

Fitzbillies was not the only Cambridge shop designed to showcase cakes. Another high-quality example can be seen on the corner of Sidney Street and Green Street, latterly home to the Edinburgh Woollen Mill. 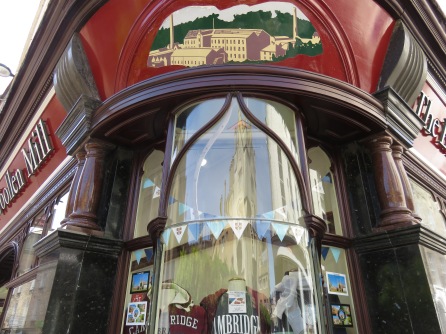 Three generations of the Moden family ran a business here as oil and colourmen from 1850 until 1899, when John Noel Moden and his wife Ada upped sticks and emigrated to Idaho, where they opened an upholstery and furniture store.

Sidney James Freeman, a confectioner who ran a café over Moden’s shop, seized the opportunity to take control of the whole building on a 21-year lease. By Christmas 1899 he had remodelled the shop and café and installed the impressive granite and mahogany shopfront which survives to this day – sadly minus the ‘stained glass and fancy tiles’ mentioned in descriptions.

The main feature of Freeman’s shopfront is the rounded window on the corner, topped by an ogee arch. Local newspaper reports reveal that this was for the display of ‘magnificent iced cakes’ while, in the other windows, ‘bon-bons, fancy packets, chocolate, sweets, and cakes complete an inviting display’.

The modernisation of this shop was expensive – the shopfront alone cost £1,200 – and Freeman was evidently a gambler. In 1905, facing pressure from creditors, he fled to Australia ‘with some vague idea of “striking it rich” on the gold fields’. In spring 1906 he sailed home to face his inevitable bankruptcy.

Meanwhile, G. P. Hawkins Ltd. (that is, George Plume Hawkins who, when mayor of Cambridge in 1919-21, ‘dispensed hospitality in a style worthy of Lucullus’) acquired Freeman’s business cheaply, for £525. He ran the Cambridge Café at 47 Sidney Street in tandem with his older business, the Dorothy Café across the street, until the lease expired in 1920. Thereafter, throughout the middle of the 20th century, the shop was occupied by a tailor called Bodger’s.

George Peck (1827-1909) set up as a chemist in Trumpington Street, in his home town of Cambridge, in 1851. Three of his 11 children followed in his footsteps by becoming pharmacists. Ernest Saville Peck, the eldest, assumed the reins on his father’s retirement in 1904.

In 1904 Peck’s shop was at 30 Trumpington Street, where the shopfront survives. Over the corner entrance is a large bronze shield topped by a mortar and pestle – one of the most common symbols that identified chemists’ shops – with a spray of curling foliage reminiscent of heraldic mantling. Gilt letters proclaim: ‘G. PECK & SON LTD DISPENSING CHEMISTS EST 1851’. Note the stylish form of the ampersand.

By the 1920s Peck’s had taken over a shop at 9 King’s Parade, which is effectively a continuation of Trumpington Street, closer to the centre of town. This long-established ‘chymist’s’ had been run by Arthur Deck (1825-1903) since his father’s death in 1853. The two chemists, Peck and Deck, had traded along the same stretch for many years: a recipe for confusion one might think.

Peck’s did not inherit the Royal Arms which Deck had proudly displayed between the two ironwork balconies over his shop. The Arms were replaced by a hanging sign, which has been modified to display the name of the current occupant, ‘Mr Simms Olde Sweet Shoppe’. The shopfront itself remains pretty intact. One of the chemist’s favourite motifs, a snake entwined around a chalice, can be spotted at the top of the Gothic-style pilasters. The cross-bars of the plate-glass windows would have corresponded to a carboy shelf, and a barometer is still fitted to the door frame.

In 1934 a new shopfront was installed for Peck’s on St Andrew’s Street by the shopfitters E. Pollard & Co. Ltd. The shop – today ‘Links’, by the entrance to the Grand Arcade – has been transformed beyond recognition.

The lost shopfront was a neo-Georgian affair, surprisingly like W. H. Smith’s shopfronts of the same period. It was dominated by a massive transom, divided into small square panes which rather obscured the display carboys. Although this has been replaced, to the left is a contemporary brick doorway topped by a relief carving of an owl perched on a mortar and pestle and clutching a scroll. This is flanked by the dates 1851 – when Peck’s was established – and 1934.

The building now occupied by Hong Kong Fusion was erected (with a new cellar) in 1872 for the university robe makers and tailors, Vinter & Son. It’s wonderful that the façade survives all of a piece, including the ground-level shopfront. 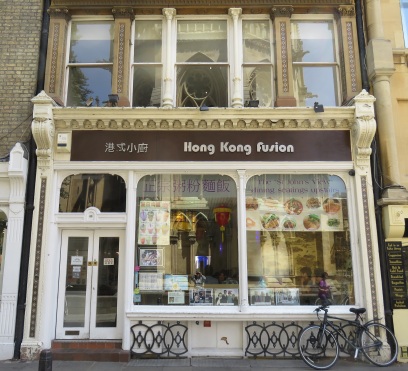 In 1872 Charles Arthur Vinter (1843-1898) had recently taken over the business from his father, Charles (1810-1881). Their old shop had ‘a nearly-new mahogany-frame SHOP FRONT with PLATE-GLASS FITTINGS, shutters and door complete, 17 feet by 9 feet’, but this was sold with other old building materials, and Vinter put up a complete new frontage. The Vinters did not live on site – in 1871 the building was occupied by their foreman, Joseph Gillings

It’s worth stepping back to study Vinter’s entire façade, which is a lesson in the ornate High Victorian architecture of the early 1870s. The area beneath the display windows – under the ‘stall board’ – is recessed and protected by ironwork screens to light the cellar. Patterned encaustic tiles adorn the pilasters and window jambs. The windows contain huge panes of plate glass: in fact, the first-floor sashes form a wall of glass, structurally assisted by very slender cast-iron columns. Above this several heads can be spotted in the terracotta decoration. But what do they represent?