Posted on September 24, 2016 by buildingourpast

In its early years, the key to successful multiple retailing was selling goods for cash, not credit. Bearing this in mind it is not surprising to find, in the 1870s and 1880s, that several different companies opened chains of boot and shoe shops under the simple name ‘Cash & Co.’ – just as Jesse Boot branded his shops ‘Boots Cash Chemists’.

It is difficult to disentangle the various Cash & Co. chains. One of the first was established by Manfield & Sons of Northampton, who traded as ‘Cash & Co., The Well-Known Boot & Shoe Makers’. Rebranding as ‘Manfield & Sons’ in 1883, they claimed:

This alteration has been rendered necessary by the frequent Piracy of the name “Cash & Co.,” whereby unscrupulous persons, trading under this and similar titles, have sought to mislead the Public and benefit themselves by the sale of inferior articles (Birmingham Daily Post, 1 December 1883, 7)

In 1886 a company called ‘Cash & Co., Leeds Boot & Shoe Store’ bought the Royal Boot Store, located opposite the market clock on Church Street in Whitby. Its advertisements stated that ‘The firm is in a position to supply the public at strictly Wholesale Prices, because they supply direct from the Leeds Factory to your feet’ (Whitby Gazette, 10 July 1886, 1). So far, the identity of this Leeds factory has proved elusive.

Manfield’s greatest problem, however, was a chain called Cash & Co. set up around 1882 by William and Edward Turner, who had footwear factories in Leicester and Northampton. One of their branches was photographed in Shrewsbury by the Italian businessman Joseph Lewis della Porta in 1888. 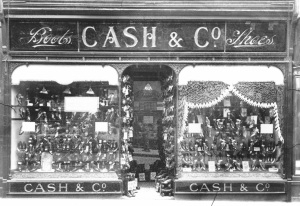 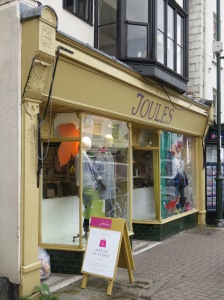 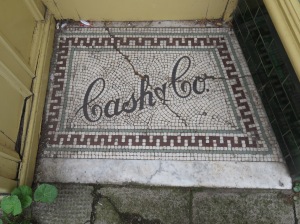 By 1914 Cash & Co. had 136 branches. The most obvious traces of these shops to survive are the tiled floors of entrance lobbies. Examples can be seen in Monmouth and, slightly later in date, in Haverfordwest. In each case the stall risers beneath the windows were clad in green tiles. A W. & E. Turner Ltd mosaic survives in the High Street in Lowestoft. Both Cash & Co. and Turner’s sold footwear under the brands Dr Hackett, Hyacinth, Snowdrop, Boulevard and – most prominent on shopfronts – Pioneer. 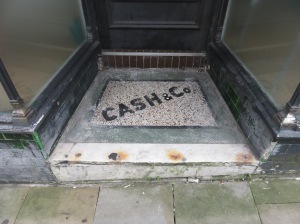 In 1980 Turner Shoes – with 140 shops – was bought by Hepworths for £9 million. The Turner name quickly vanished from the high street, and some of the shops may have been used to launch Next in 1982. 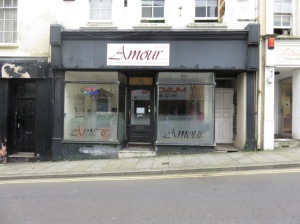